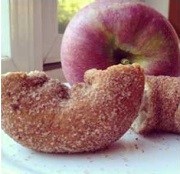 With all the recent publicity surrounding the amount of sugar in breakfast cereals, the release of ‘That Sugar Film’, and the WHO revising their recommendations on the maximum daily allowance for added sugars, it got us thinking. Who really knows how much sugar there is in common foods?

Sure, you can read a label. That will tell you the amount of sugar is in the food, but it doesn’t reflect what happens in the body. Your body digests food into the most basic elements: amino acids from proteins, fatty acids from fat, and sugars from carbohydrates. It doesn’t care where these basic elements come from.

What this means is that your body doesn’t know the difference between the sugar in Coke or in a chocolate éclair, or between an apple and a donut. The effect of sugar in the body will be different according to the source of the sugar (of course apples are healthier than donuts and offer nutrients other than sugar), but once digested the sugar in your system is the same. And unfortunately sugar contributes to weight gain.

It’s obvious that some foods have more sugar than others: consider the question “Which has more sugar – a bag of lollies or a steak?” Nobody could get that wrong in a guessing game. But what about something less obvious? Does the apple have less sugar than the donut?

It’s not looking good so far for the apple. But let’s see what happens when we include the carbohydrate total, which, after all, is digested into sugar.

If you’re trying to lose weight the total carb is just as important as the sugar. To make it more difficult to understand, the carbohydrate in the apple comes packaged with fibre, which slows down the process of digestion and so the effect of the sugar on your body is reduced.

The donut, on the other hand, has no fibre but a generous serving of fat. Like fibre, the fat slows the digestion of carb but when fat and sugar are eaten in combination, weight gain is almost certain for those whose bodies gain easily. This is not a recipe for weight loss.

So while it’s good to be aware of both added and naturally occurring sugars in foods, if you’re trying to lose weight it’s also important to be aware of the total carbohydrate amount. Read the labels and make good choices, but better still is to eat fresh, whole, single-ingredient foods that don’t come with labels. Your weight loss efforts will thank you for it.