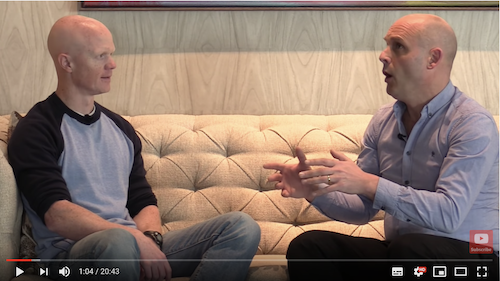 Diet boosts metabolic rate up to 300 calories a day!

Below is an edited transcript of an interview by low carb researcher and engineer Ivor Cummins interviewing Dr Ben Bickman Phd. (Items in brackets have been added.)

Obesity and diabetes are both metabolic disorders

Insulin is what dictates energy use in the body. Insulin affects the degree to which your mitochondria use energy.

To the average person struggling with their weight, if they can adhere to a diet (an eating style) that keeps their insulin in control it creates a situation where the body is literally ‘wasting’ more energy.

All humans have white fat (mostly) and some brown fat. The brown fat has more mitochondria and they are ‘uncoupled’ causing them to use more energy (calories).

What they found, if you can keep insulin low, your white fat cells start to act a little more like brown fat cells. It starts to burn more energy.

This explains some recent clinical research that looked at diets that restrict carbohydrates enough with more protein and fat (which have little effect on insulin), their insulin goes nicely low. The people following this eating have higher metabolic rates.

This ends the tedium of counting calories or exercising continually to get into and stay in a calorie deficit. That’s miserable. Nobody enjoys that.

This gives you some wriggle room, some freedom. No counting calories required.

This also explains why weight loss trials showed a low carb diet high fat diet where you could eat what you want beat the calorie-restricted low fat diet.

There are lots of advantages. The laws of thermodynamics are still being upheld, but it’s just that these people (following a low carb eating plan) are running a little bit hotter. Even though they can eat ad libitum (as they feel like) they don’t. They end up self-regulating. They end up being more satisfied with what they’re eating.

The nature of this diet is that it is more nutrient-dense, so there’s lots of other benefits to a healthy low carb diet that’s well-formulated.

And of course obesity (and weight control) is the big thing. Everyone’s interested in losing some weight.

Ivor works for Irish Heart Awareness Ihda.ie and he’s mostly concerned with people who are at risk of a heart attack and don’t realise it – using the calcium scan.

This diet contributes hugely to heart health. And if you have diabetes or undiagnosed diabetes, you’re ‘thin outside fat inside’, applying this certainly will reverse aspects of your diabetic physiology.

Let’s talk about how the burning of more glucose, the lower insulin… how they tie in to lower heart disease risk.

Most diabetics will die from heart disease. It’s not the diabetes that gets them. A common core is insulin resistance. But that’s not the whole story. The other side if this is hyperinsulinemia. The two conditions go together.

I see that when people adopt a low carb diet one of the first things they have to do is monitor their blood pressure medication. As their blood pressure drops so quickly they are getting light headed all the time. They may need to change their dose. Their physician is the one to help them do that.

This is one of the flags of the power of the low carb diet for heart health and reversing diabetes. So when you go on a low carb diet not only does your insulin drop, you blood pressure drops, your cholesterol ratios improve in the vast majority, your GGT and liver enzymes recover and lower, and your weight drops as well and that’s a nice side effect.

People are losing weight and that’s good but know that the body is becoming more insulin sensitive, insulin is coming down, and there are a host of beneficial things happening, like liver fat reducing. Brain function, the neurons actually start to improve. Fat cells pick up their metabolic rate. Muscle cells work more efficiently. Everything gets better.

It sounds like “too good to be true’. The majority of adult American (and Australian and New Zealand) adults are essentially diabetic with a huge risk to heart disease, even if they appear slim, because the hyperinsulinemia and insulin resistance is the problem.

People find it hard to believe that we’ve gotten the wrong advice for 50 years from all he experts.

The original source of this interview is HERE.

Want to learn about the right Low Carb Eating Plan for your body?

To find your nearest centre, fill out the form on this page or click HERE. Contact them and ask for a free info session. If there is no centre near you, many centres offer the program via online coaching as well.