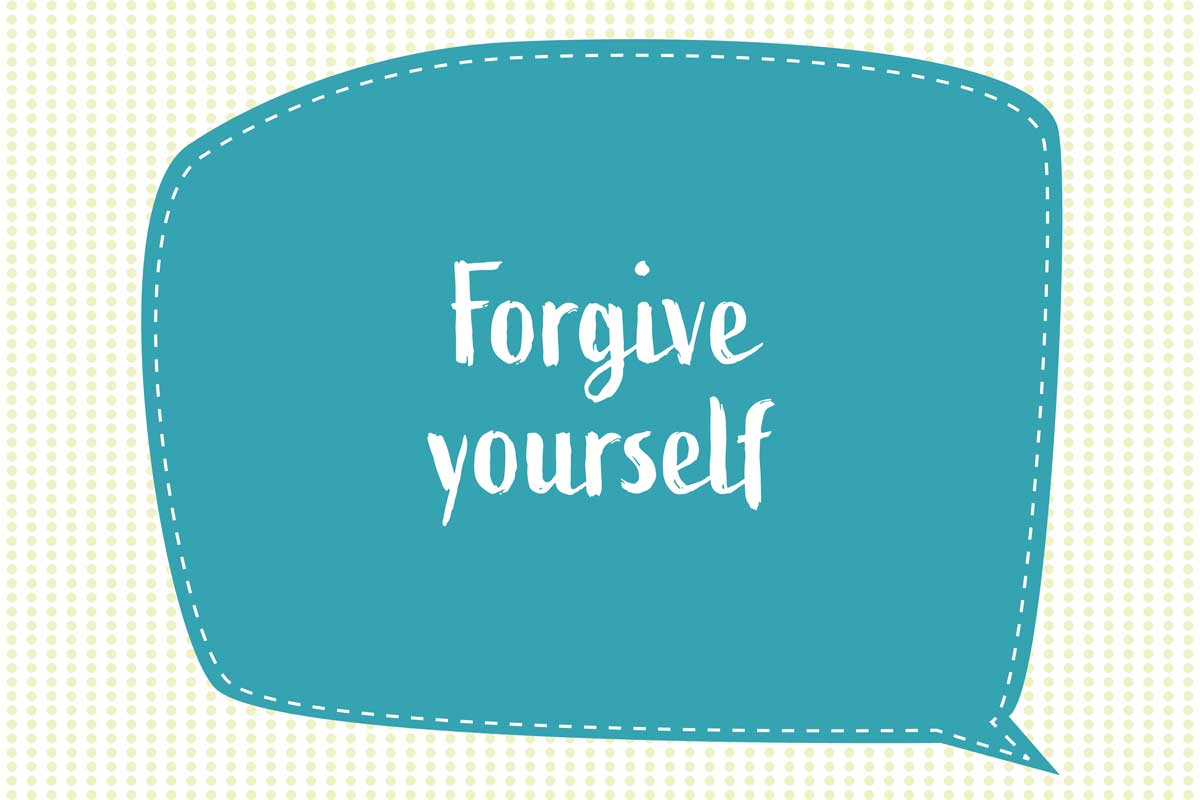 The ability to forgive yourself, to show the same empathy and understanding to yourself that you would show a friend, can have a big influence on achieving your goals.

Imagine you’re cutting up the vegies for dinner and the knife slips. You cut your finger, and decide that you’re useless in the kitchen so will not bother trying again. While it might sound like a fabulous idea, you wouldn’t do it. You might think “You idiot” or similar, but you’d grab a bandaid and get back to dinner preparation. In short, you’d forgive the slip.

Now you’re driving to work. Traffic is busy and you can see that the lane beside you is moving more quickly than yours, so you flick on the indicator and start to merge. The blast of a horn sounds and you realise there was a car in your blind spot. You swerve back into your lane, think “Whoops, that was close” and carry on. You forgive your mistake.

Next, you’re cruising along with your new eating plan. You plan your menus, shopping, and cooking, and your weight loss is cruising along nicely. Then a friend invites you to dinner and serves choc-fudge brownies for dessert. Not wanting to offend (or, let’s face it, to miss out) you eat your dessert. It’s divine. Minutes later, however, you start to feel guilty or disappointed or ashamed or defeated. “I’m hopeless. I can never say no. I might as well give up because I’ll never lose weight.” Where’s the forgiveness now?

Once you’ve made a mistake, it can’t be undone. Dwelling on it won’t change a thing, but it will hold your focus on the past. Forgiving the mistake allows you to look forward and make choices about the present and the future.

Everyone makes mistakes. Those who claim to be perfectionists can be easily paralysed into inaction, where the fear of making a mistake stops them from trying something new.

Nobody is perfect and perfection in any area of life is unattainable, especially in areas where we are trying to establish new habits and patterns of behaviour. It’s natural that mistakes are going to happen. Sometimes the mistakes are accidental and other times they’re deliberate, but either way the mistake signals not failure but a learning opportunity.

You might need to ask yourself some tough questions:

One mistake or indulgence is not going to derail your progress. Neither will two, or four, or even a month of indulgence. They’ll slow it down, for sure, but the only thing stopping you from losing weight would be your mindset.

After the mistake, forgive yourself and get back on track. You’ll survive, and you’ll be back on your way to achieving your goals.