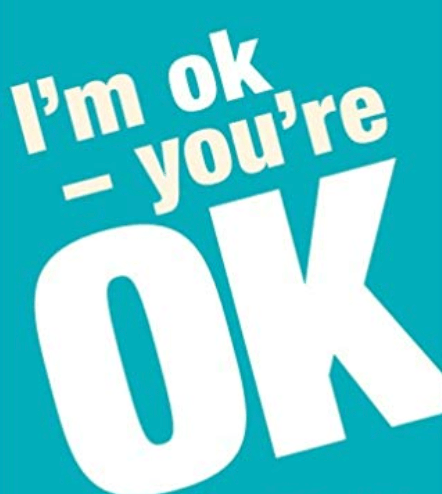 You may have heard of the New York Times best seller “I’m OK – You’re OK” by Thomas Harris. It is a practical guide to transactional analysis as a method for solving problems in life.

Transactional analysis may be defined as a system of popular psychology based on the idea that one’s behaviour and social relationships reflect an interchange between the parental (critical and nurturing), adult (rational), and childlike (intuitive and dependent) aspects of personality established early in life.

Harris suggests that our brains record experiences like a tape recorder, ready to be relived with their original emotional intensity. As such, emotionally intense memories from childhood are present with us throughout life.

The ongoing influence of these emotions can be understood by looking at the verbal and non-verbal interchanges, or ‘transactions’, between people, and the way we deal with our thoughts.

How do your thoughts influence your actions?

The author suggests there are three mental states into which we can switch: the Parent, the Child, and the Adult. These mental states are all context related. Let’s look at some examples in the context of food choices.

Think of the Parent state as a collection of tape recordings you made as a child, which represent what you observed adults doing and saying.

These recordings are typically belief-based and imply judgement. Think back to the body language and facial expressions of your parents saying these types of things to the younger you.

Most of our grandparents endured the depression and wars. Circumstances forced them to form some rules or beliefs that helped survival in difficult times.  These beliefs were then imprinted onto their children – our parents. Despite their best intentions, our parents then transferred the beliefs to us, and perhaps those beliefs are unhelpful for our health goals in a very different world from when they were formed.

The Child made simultaneous recordings of internal events based on what you felt at the time. Think back to the context of how you felt when sweet foods were used as a reward.

Now think back to your body language and facial expressions when receiving a lolly or an ice cream, or when you were pestering for it. Along with these emotions may be the memory of the addictive dopamine rush on the brain from the sugar.

You likely had a child-like smile – both then and even now under the same circumstances.

Your face might even light up in a child-like glee.

It’s good to be aware of other things that may add extra influence to your choices.

All relationships have levels of complexity. We may not be aware that the ongoing relationship patterns with others in our lives, possibly including people who have passed away, might still subconsciously dominate our current behaviours – including our food choices.

Think about the emotional pressure to please when, after a completely satisfying meal, your mother brings out a big cake and says “It’s your favourite. I made it just for you.”

Then there’s a situation that behavioural economics experts may like. At the end of a restaurant meal the waiter brings out the dessert menu and says “Normally these are $15 each but these are gifts from the chef“. You’ll be much more likely to say yes and eat some if it is free, despite being completely full.

Whether it’s the Parent state or the Child state, we regularly experience emotions, social pressures, and relationship cues, mostly of which we are unaware.

Finally, the strongest, most empowered state is that of the Adult who simply lives, acts, and decides in the “here and now”. The Adult avoids, for the most part, the beliefs and emotional influences of the Parent and the Child. It’s not that the Parent (belief-based) or Child (emotion-based) states don’t play their thoughts in the Adult mind. The states appear, but by seeking to stay in an Adult state we can say hello to the Parent or Child thoughts as old friends (or foes) and make a conscious decision that a different option is in alignment with our health goals.

Be aware that it’s normal to have Parent and Child tape recordings. The Adult is able to act as a librarian of sorts: they know the information and where to locate it, but they don’t have to live by that information.

Keep an eye on your thoughts and you’ll be OK, or at least be moving towards OK.