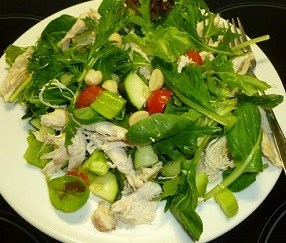 It seems like forever that we’ve known that eating plenty of vegies and fruit is good for our health – and our waistlines – but how much actually constitutes ‘plenty’?

Research published in the Journal of Epidemiology and Community Health has quantified how much we should be eating. The researchers looked at data from the Health Surveys for England for 65,000 adults over the age of 35, between 2001 and 2008.

While the study had limitations (participants reported on their vegetable and fruit consumption over a 24 hour period, and it was assumed that this intake was typical for each participant), the findings are encouraging.

Participants’ dietary intake of vegies and fruit was compared to mortality data over the following eight years.

The average daily intake of vegies and fruit was 3.8 servings, with older non-smoking women eating more than other demographic groups. Interestingly, those who ate more vegies and fruit tended to have a lower BMI – hence the common weight loss advice to eat more of these foods.

The researchers found that vegetables seemed to provide a greater health benefit than fruit, with increased fruit servings making no difference in survival rates.

The study authors acknowledge that the results show a strong association but not necessarily a causal relationship, but suggest that it’s important for health and survival to eat more vegetables. This is supported by research presented in March 2014 at the American College of Cardiology that found that women who ate eight to nine servings of vegetables in their 20s were 40% less likely to have dangerous plaque in their arteries in their 40s.

So what can we learn from studies such as these? There appears to be no harm in eating more vegies, and if it decreases risk of death (and presumably suffering) from some nasty diseases, then it might be worth increasing intake.

Include some vegies at breakfast (spinach, tomato and mushrooms are popular choices), a salad at lunch, and plenty of steamed vegies at dinner, and you’ll be well on your way to eating at least 5 serves of vegies. Add a bit of fruit, and perhaps add to your snacks with some vegie sticks, and you’ll be developing the habits to look after both your health and your weight for the rest of your life.