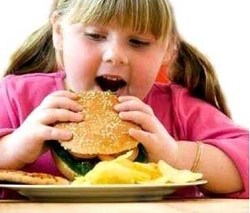 Develop good habits for your kids

It’s amazing that for all the information available about healthy eating, it might take a confronting TV advertisement targeting how adults choose to help their kids develop good habits. Published by Children’s Healthcare of Atlanta, the ad shows 32 year old Jim in hospital after suffering a heart attack. He looks back at how his life brought him to this point.

Junk food, ice cream, soft drinks, and inactivity feature, but perhaps the most profound images are those not of Jim’s choices but of the adults in his life. His choices as an adult have been formed by ongoing childhood messages from his parents, teachers and the school canteen.

Adult behaviours are often set during childhood. It appears that Jim may have been a fussy eater, putting on quite the performance when not fed what he wanted. His mother, in desperation, complied with his wishes. It’s understandable when the child is inconsolable, the parent tired and stressed, and the solution easy. It’s a quick fix.

But what about the longer term? Early behaviours lead on to later behaviours.

Parents need to look beyond the immediate future to the habits they’re inadvertently creating. They need to think about the immediate health and welfare benefits for their children as well as what the future holds.

No parent would deliberately create an adulthood of poor health, discomfort and reduced opportunities for their child, yet without realising it this is exactly what poor food and exercise choices lead to.

The catch-cry “But he won’t eat anything else” is a poor excuse. A child will not starve themselves.

Perhaps the major problem in some families is that the parents themselves are addicted to junk foods. Sugar, fat and salt in combination is the recipe food manufacturers follow to ensure we eat more of their foods. They’re interested in profit, not the health or waistlines of their customers.

Legislation protects our kids from toxic substances that are legal for adults – think alcohol and tobacco. Why should there not be legislation to protect them from the toxic effects of junk foods? The answer is because too many adults think it is their right to determine what their kids eat. This is fine if they’re feeding their kids well.

Parents need to draw the battle lines. By making fresh, healthy food available and eliminating junk food, the child will have no options. Sure, it will be uncomfortable while old habits are being broken, but with strength of will and the long term benefits in mind, the parent needs to win the battle.