"I can eat this and lose weight?!"

The latest from our enews...

Social Situations and How To Avoid An Expanding Waistline 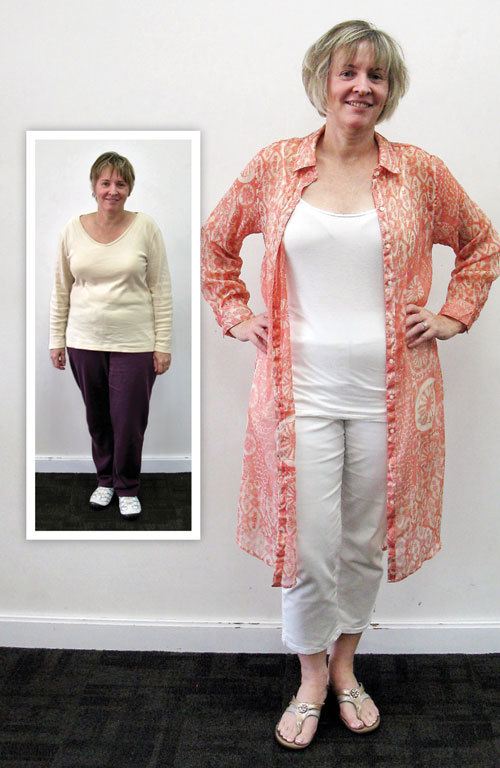 I’m not sure how the weight crept on. Usually my weight just stayed the same but I suspect menopause, aging plus my back problems had something to do with it. I also moved from an active job to a more sedentary one, which would have contributed to the ever growing waistline.

Finding clothes to fit was becoming an issue.  I just wasn’t the right shape for any size! This was pretty depressing to say the least. Not to mention my thighs were rubbing together (something which had never happened in my life before)!  I had tried various things and managed to lose a few kilos, but that’s where it stopped.

Just before leaving my office job I discovered two discs in my back were herniated, which stopped me from doing any sort of exercise for a few years and also made me re-evaluate my lifestyle. I left my boring office job to pursue my love of singing and songwriting. I studied Music Business and began performing on stage but felt like a blob and hated having to wear tents to cover up. I was convinced that losing weight for good would never happen and I’d just have to live with it. Over the next few years my back improved, so I decided I should resume some sort of strength exercise, if nothing else.

This led me to turn to my good friend and Coach Nola who I had met through a training group. I decided to come along to a special Women’s Health Week session at Healthy Inspirations Prospect and see what the fuss was all about.

Admittedly I was still not convinced that anything was going to shift this excess weight. I decided anyway to get started and took on board the nutrition plan thinking nothing would change. How wrong I was!

The weight began to fall off almost immediately. Five kilos disappeared fairly rapidly and I then decided to shift a couple more to give me a bit of a buffer zone.

At this point, I have to say it was incredibly easy. I hardly felt like I was even trying. In fact, it made life easier. Before Healthy Inspirations I was only eating between 12 – 8pm which made it difficult when invited to breakfast. I also like to eat in the early evening so late dinners don’t work for me, but thankfully I have my friends well trained! Overall it has made my social life easier than before. My only challenge has been cutting down the glasses of bubbly, which I still enjoy, just not as many.

I’ve found now that being on stage and travelling for gigs and teaching private pupils singing is great for my back as I’m not always sitting or standing. The circuit equipment here has helped build muscle and increase both my weekly physical activity and fitness levels.

My clothes fit so much better, which is a bit of a relief for someone that spends a lot of time performing on stage.  I am also so much more comfortable while exercising and the most impressive thing for me is that my thighs have stopped rubbing together when I walk!