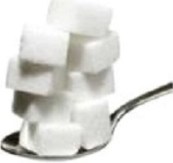 Sugar is also known as the molecule Sucrose, which is half Glucose and half Fructose. It occurs naturally in fruits and vegetables, where it is combined with fibre, water and nutrients. A medium size apple yields the equivalent of 3 teaspoons of sugar.

Humans, in our current form, have existed for 100,000 years or many times that. That’s over 4,000 generations of your family! We evolved as hunter-gatherers and learnt that if a fruit was sweet, it was likely to be safe and ready to eat. As they did not have supermarkets with freezers and transcontinental shipping, they rarely ate fruit and only when it was in season and ripe.

Have you ever tried to eat an unripe mango?

The desire for sweet foods persisted and sugar in its processed powder form became available around A.D. 500, about 1,500 years ago. For hundreds of years it was a rare commodity, mainly consumed by the wealthy. Sugar was the main crop of the global slave trade that made many slave traders and goods traders rich. Here are some statistics:

We humans have evolved over 4,000 generations with the internal biology to survive through scarce food supplies. We’d eat what was available, when it was available. Our endocrine system of hormones evolved to help us store fat when we had plenty of food, especially when we could get the sugar from the rare fruits available and only when in season. Fruit at its ripest – and sweetest – is available at the end of the warm season, so fat storage occurred and was able to carry people through the cold seasons, when food was scarce. But in the last 8 generations we have had plentiful food year round, and no evolution where our systems would be able to adapt to consuming an added 22 teaspoons of sugar a day.

When you eat unripe fruit (if you could swallow it) you will probably feel ill soon after. This is an acute response. Touch the hot pan and it burns – and so you learn not to touch hot pans. We now have poison messages on bottles and warnings about allergens, freezing, storing and correct preparation on the labels to protect us.

But when you eat 10 – 20 or more teaspoons of added sugar daily (added to so many foods and drinks) your body’s natural hormonal regulation systems eventually wear out.  This can happen in childhood. Unfortunately we are seeing more reports of children and teenagers suffering Type II diabetes (it used to be called “the sugar disease” as well as “adult-onset diabetes”) and obesity, with no solution in sight.

This wearing out of the body’s endocrine system is a slower chronic response. We humans don’t respond to chronic diseases until it is too late. Neither do our governments and health authorities.

It is human nature, and especially political nature to respond to acute harm. Witness the USA, where nearly 3,000 people died in one day. That acute event triggered trillion-dollar military responses in Iraq and Afghanistan.

But is some sugar OK?

If you only had a snack that had no more sugar than the amount that you get wrapped up in an apple, this would not be a problem. A medium apple provides the equivalent of 3.5 teaspoons of sugar and just 0.4 g protein. A serve of our Procrunch protein bars provide less than 3 teaspoons sugar and 13 g of appetite sustaining protein.

Can sugar be addictive?

The definition of addiction varies, but typically includes words such as dependence, craving, habit, weakness, compulsion, fixation and enslavement.

There’s no need to refer to numerous studies that clearly answer this question and the answer is YES!

For hundreds of years many business people got rich on supplying sugar manufactured at low cost by the slave trade. Eventually the world woke up and human conscience forced a political legislative change. Eventually technology (the steam engine) replaced the slaves but the sugar kept coming as food manufacturers and fast food outlets learnt that they could increase their profit if they added sugar.

Now it is completely legal to serve a giant sized SLURPIE that contains 16 teaspoons of sugar to an obese (soon to be diabetic) child. Drinks with sugar (including juices) are a triple health disaster:

This will never change until we have food legislation.

Who’s responsibility is it – yours or the government?

It certainly helps if you are fully informed about the risks of having too much sugar in your diet, and especially the diet of your children. If you give them money for food at school, do you know if they buy a SLURPIE with that money? Of course you can take personal responsibility for what you and your children eat, but many don’t and we all pay for their mistakes in increased health care costs and taxes. If ever you notice overweight children with their parents having sugared drinks or ice creams, don’t be surprised if the parents are overweight or obese. Attempts to change the behaviour of these parents is problematic as they may be sugar addicts themselves and blind to any “personal responsibility” messages.

But governments also have a role in minimising the prevalence and unavoidability of sugar in our foods. Here are three examples of leaders taking action to protect the community:

This Sunday 9th Feb at 8:00 am you might be interested to listen to Background Briefing on the ABC Radio National. They are doing a special documentary entitled “Is Sugar Innocent?”

Should sugar be regulated like tobacco and alcohol? http://healthland.time.com/2012/02/02/should-sugar-be-regulated-like-alcohol-and-tobacco/